How much can you disrupt the storage market for VDI/SBC in less than a year?

The answer is "quite a bit"

Get a sneak preview of Project VRC's 'State of the VDI and SBC union' community survey output to find how.

The independent R&D project ‘Virtual Reality Check’ (VRC) was started in early 2009 by Ruben Spruijt and Jeroen van de Kamp and is focused on research in the desktop and application virtualization market. The team has released several white papers in conjunction with Login VSI about the performance and best practices of different hypervisors, Microsoft Office versions, application virtualization solutions, Windows Operating Systems in server hosted desktop solutions and the impact of antivirus.

For the past two years, Project VRC has released a 'State of the VDI and SBC union' community survey. You can download results for free at www.projectvrc.com/white-papers. Up until the 2014 survey, over 1300 people have participated. The results of this uniquely independent survey have provided new insights into the usage of desktop virtualization around the world. Personally, I've found it a splendid resource and used a number of the project's graphs in presentations and analysis.

You may remember being prompted to fill it in back in January. If you were one of the 400 people who read that and then filled it in, thanks very much. If not, there's always next year. Submissions are now closed and the team has collated the data. I've been lucky enough to get a heads up on the latest draft prior to full release 24th March. I've been given the nod to give you at least a couple of insights.

Project Virtual Reality Check's goal is to share insights about usage, configuration and trends in the Virtual Desktop Infrastructure and Server Based Computing Industry hence, a "state of the VDI and SBC Union".

As you may know I work for Atlantis Computing - so naturally I took a look at storage solutions in the VDI/SBC environment for the respondents; but I've worked in the EUC space for the best part of 15 years at the time of writing so I was also keen to look at what is deployed as-is, where people are going and who was responding in 2015.

In reviewing that and the 2015 report - we've the same-same, but different. 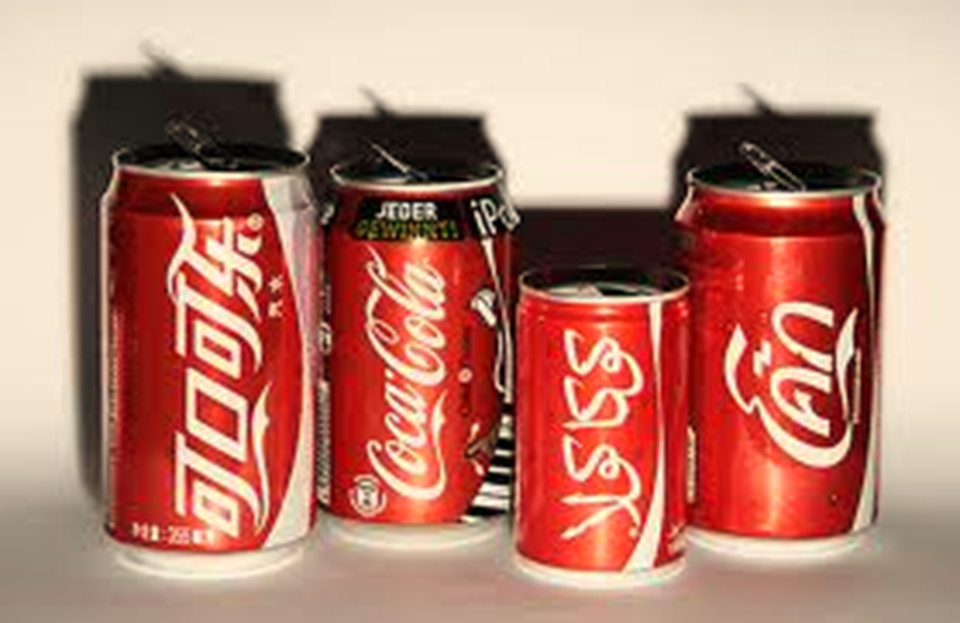 Respondents are more or less the same group as in 2014;  more or less working for the same organisations. There is a more focused country list: it could be suggested international firewalls are kicking in, perhaps more likely what were single respondents have moved to "none".  In this respect I think it'd be handy for numbers of respondents; but that's just me.

SBC/VDI numbers in terms of split were about the same. While "centralise management" as a reason still remains in the top 1 for "importance of VDI/SBC" in the eyes of the respondents, the rest of the table has changed. I think this reflects the greater business drivers for these technologies that have evolved over the past year or so, moving to supporting mobility and the acronyms of BYOD/CYOD/COPE.

Hypervisor wise, VMware still wins out; then XenServer, then Hyper-V with a feeling that people are working hard to keep up with the latest releases and remove raw tin.

I interpreted the numbers to show "implementations are getting older" - as you mature, your implementations mature. Let's be honest, projects do fail. But it seems when it fits - it stays fit.

That said, while there are a lot of similar graphs, there are key changes both in responses and questions. 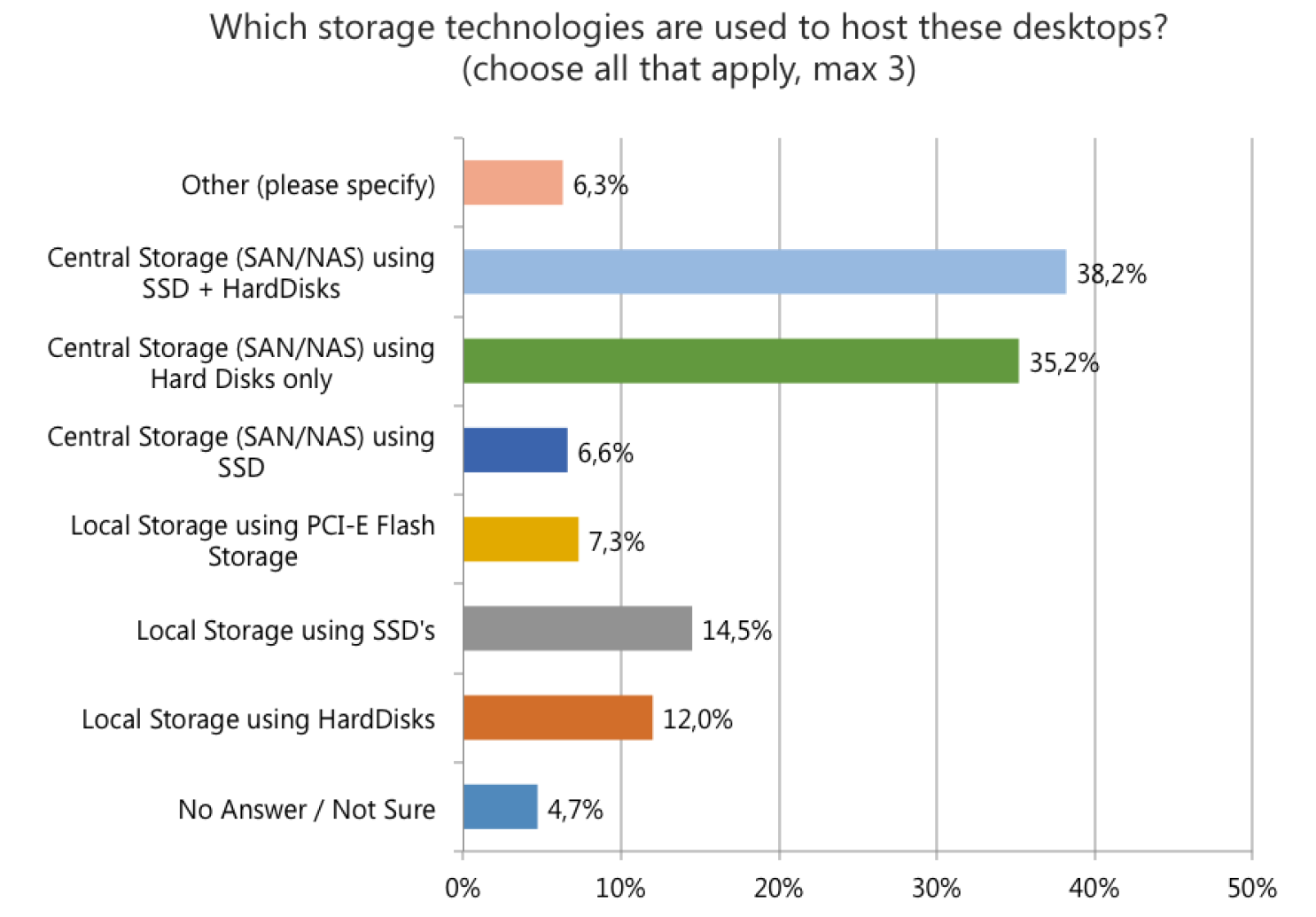 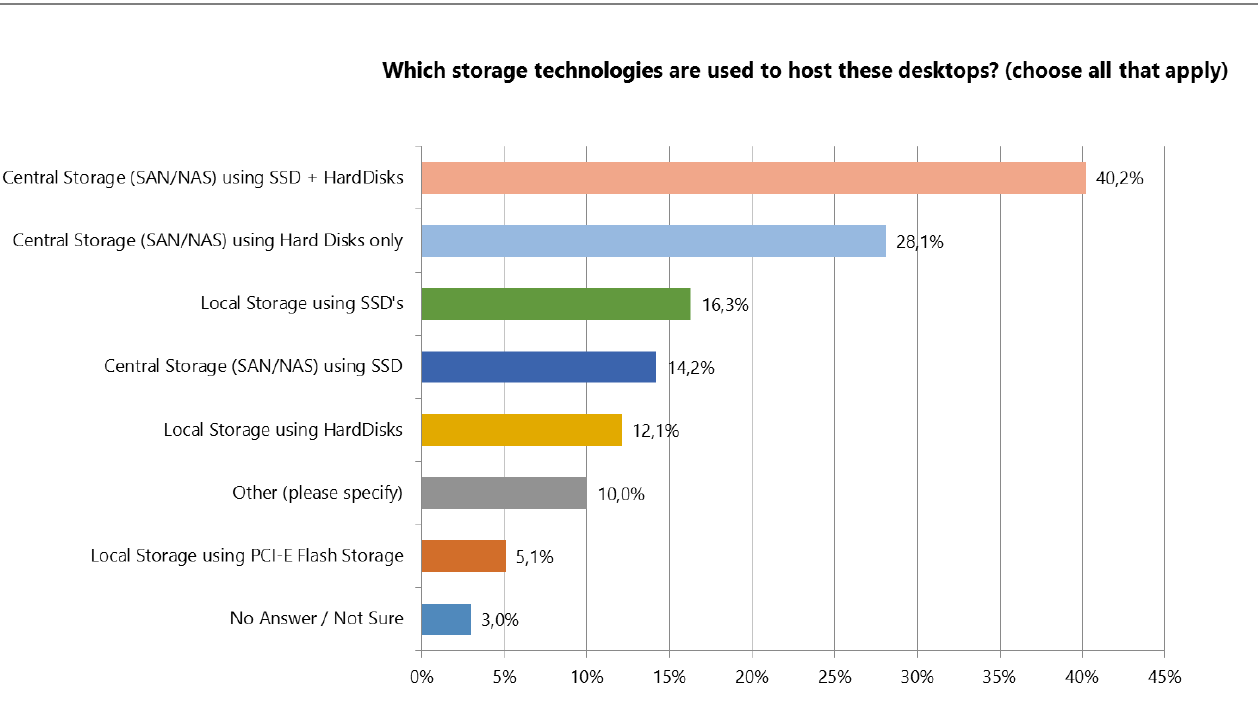 There is a growth in use of SSD (which mirrors my own lab - 500GB SSD for £180.. who wouldn't?: SSD performs better, has fewer moving parts so breaks less, less demand on power and isn't as noisy..).  Growth in local storage - cheaper and easier and than. All it seems, at the expense of HDD only SAN.

I take from that SSD for storage and performance is the trend. Sure, organisations are keeping VDI/SBC solutions - they work. From a storage perspective the trend is to use SSD either with, or replacing HDD. Spinning disk only as a concept has taken a hit. 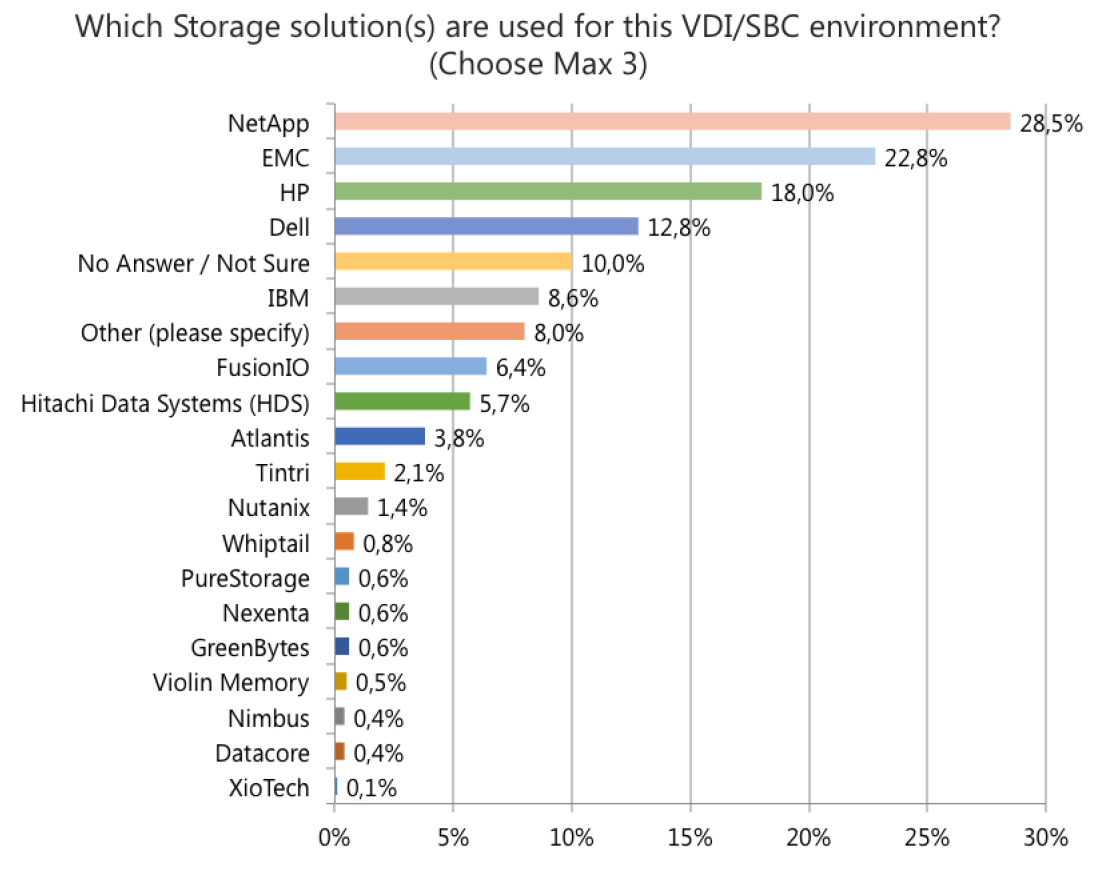 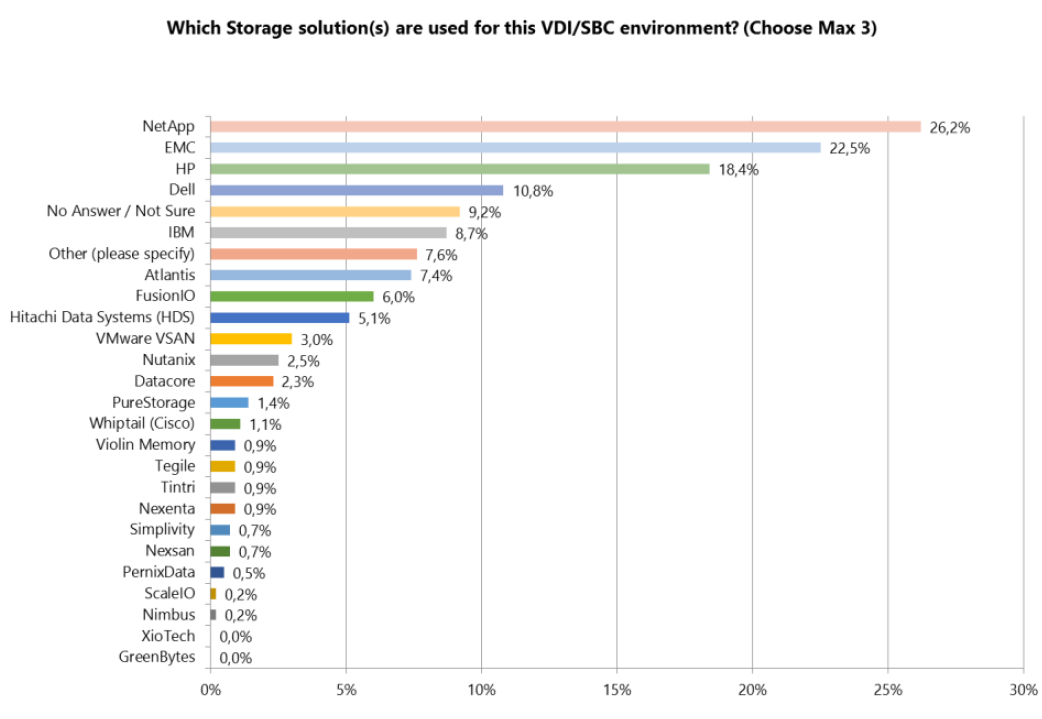 For sure, NetApp, EMC, HP, Dell - still big players. Why would they not be? You've bought the hardware, its on a lifecycle likely that hasn't finished. Same, Same... But what is different is the growth of disruptors and complementors. And of course, the growth of Atlantis Computing as a named storage platform. In a year where many are maintaining their SBC/VDI project's vitality - Atlantis Computing has had the most significant growth of all named players. Perhaps its because as a truly software defined software solution, perhaps its because Atlantis Computing's storage optimization virtual appliance doesn't have to all out replace an existing solution, it can compliment it. I can only hope for such league table movement for my home team, Sunderland AFC  ideally before the end of May.

But What Does it Mean?

A year may be a long time in politics. Yet in IT, we don't work in politics (stifle your giggles). There is still the perception that IT is a business function that can be significantly reduced because.. you know its commodity - anyone can buy a computer. Personally I think this attitude businesses stagnate.

In Brian Madden's New VDI Reality he and Gabe talked the technologyies needed to address two of the major showstopper issues for VDI. Without spoiling the ending, one of those showstoppers was storage. Poor storage performance and capacity can kill a VDI/SBC project as it impacts operations and it impacts user experience.

Use of local storage and SSD in preference to spinning disk is on the rise. EMC, Netapp, Dell, IBM storage is still in place today but those solutions are increasingly being augmented with alternatives. Of all the alternatives, Atlantis Computing's virtual appliance has had the largest growth.

Keep an eye out on the 24th and download the Project VRC report - well worth a read.