I am a user of virtual desktops. I use them daily. At the same time I also fit into that “poor use case for VDI’ bracket because I travel a lot: and often require access to resources off-line. I’ve delivered many virtual desktop solutions, yet I'm a firm believer that for End User Computer (EUC) you have to be able to cover all eventualities; and that will undoubtedly mean having tech to support off-line (and by off-line I mean laptop) use.

There are many camps that say “to heck with VDI, it’d be easier if we give every a laptop”. Yet, there are considerations for your laptop estate, including (but not limited to):

In all – laptop delivery can give user own compute power, give users the facility to work offline: but you can’t represent that value without a taxation.

Have you considered what will happen should it all go horribly wrong?

Consider that most organisations consider DR for their datacenter or their office. But, each laptop user is essentially a roaming office.

How do you recover them?

I was at Citrix Synergy in Orlando. My partner in crime Jim Moyle and I were scheduled to give a presentation on a Tuesday. To guard against poor network performance we'd sorted pre-recorded demos (which can go wrong it appears). All slidedecks and demos were on the laptop. I had tested the laptop in the hall so I knew everything worked. The world belongs to the checkers.

D-Day and I'd started the laptop up  to run through the preso. Happy that it was all good. Then the whole environment seemed to hang..no worries (I thought): close lid, skip merrily off to the conference center.

...and then turned back on again.

On arrival, sat at a comfy desk with full power.

Dropped Out: I was faced with this screen and a very fatal looking iastora.sys error.

I don't entirely know why I did it again..its a computer; it'll do the same thing again and again with whatever you try; its inherent idempotence absolute and technically the reason it was useful in the first place.

My thoughts on this were as follows: 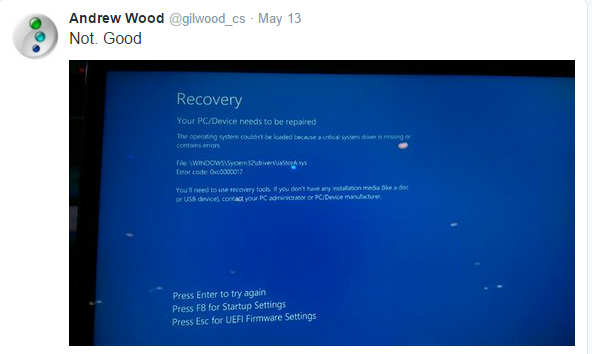 Recovery of a Laptop In The Field

I’ll admit to my mind being distracted through the second keynote as I conversed in hushed tones with colleagues who recommended installing other OSes and doing repairs. All good suggestions: none worked.

But there was no panic.. per se. All data was being hosted on Citrix Sharefile – so all I needed to do was prompt Jim to download – which he did.

Then I recalled I had in fact done something Very Sensible. I was testing Windows 10 I had actually read through the instructions – and created a recovery USB. Now, to be restored I had to disable UEFI security boot options of the laptop which no one mentioned beforehand, but once I’d done that I had a viable Windows 8 installation. Hurrah!

Where I could then File Sync Services (I'll admit I also use Dropbox and Google Drive, and yes I copy files between them)

However, a key with any recovery scenario is to be able to recover environment in the event of a loss as quickly as possible.

a) Not having data unique to the device – use of sharefile services to sync file data - and then be able to prioritise which folders need to be syncronised first.

b) Ability to recover base OS environment -  I was lucky I had a recovery USB/partition...do your users? Do they know how to use it?

c) Knowledge of how to do a) & b). Laptop Deployments Introduce Risk as the recovery of a laptop device is cumbersome. What was “missing” (should everyone be tooled/automated up)  application recovery. Ideally I’d have had a recovery option that included apps.

Granted, the capacity of USB is only so much. So this service should be cloud delivered (via Windows Store for example) – my issue here was I was abroad and at the mercy conference wifi. If there was a "recover from the cloud" app facility there should be a function that allowed you to prioritise which data comes down first

d) Understanding in-place security. To disable UEFI was straightforward (all be it, that might not have been everyone's cup of tea) – but could have been complicated by two-factor authentication if that client/software was required to gain access to internal services. A customised backup would be key.

e) Bandwidth - in terms of capacity to deliver quickly and reliably... in my case this wasn't available at the conference - but was available using my own roaming data charges...which were expensive. When you need to provision users with data/updates/applications for their roaming offline use - how do they get access to that data in the field?

How to Recover Laptops?

The only solution I’ve come across that looks even to begin how to deliver this (from a configuration/apps perspective) has been VMware's Mirage - but even that does rely on you having a recovery partition. I have looked at type #1 and #2 hypervisors and while that did work there was difficulty in recovery process (they had to have a USB stick, bandwidth usage was high).

I am interested to hear about other solutions - because what I've come across can't be the only   method. It is key to know if you distribute your EUC resources to users, and those resources fail you've a host of individual data centers failing - how do you deal with that? What appears key is :-

• Arm users with recovery options for the environment itself - recovery instructions and an emergency CD/partition and quick step documentation.

• Provide facility to recover data  – file sync services, such as Citrix Sharefile are key to allow data to be securely archived and restored.

• Be mindful of network access and bandwidth availability: because a plain install of Windows is of no working use at all, adding the data and the apps is going to take network connectivity. Consider how the apps (and any licensing required) is delivered/configured.

•Consider VDI/SBC as option from generic devices: if your user environments sync with file services disruption can be minimised.

•Test the process: because until its been tested, how do you know its going to work?

I'd be interested hear what options are in place.