XenServer 7.1 is available: you can download it now. When XenServer 7.0 was released it had a slew of never-seen-before features, significant performance improvements and a mission; to build on Citrix's Infrastructure Strategy and provide a platform to avoid additional VMware license costs (dubbed the vTax).

That said, there was a wobble with the minor issue of major data loss, but at least it was found at patched quickly. It could be said that XenServer has a Sisyphean task to present the hypervisor as a trusted platform, as a platform that expands beyond hosting the VMs for EUC workloads to be a core provider for any workload.

To properly address resolving the perception of vTax, you need to build on features, and ensure that performance and reliability closely matches alternatives. Ideally better leverage the fact that Citrix should be best able to create value through innovation and integration within their own stack.

XenServer 7.1 was announced in January. Now it is here, what is new with XenServer 7.1? How does it compare to previous releases, and what has ceased to be? Most importantly, what does the XenServer 7.1 release do for existing, and prospective customers?

First of all, there's a quite a lot of new features, and some important license and service impacts. But, ultimately not the significant performance and layout changes from 6.5 to 7 so likely that's the reason for a full on v8. Which is a pity because there is some big stuff in 7.1 which the monikur "minor release" doesn't do justice.

For XS7 I split the features into standard and enterprise, which I'll do again. But, with the XenServer 7.1 release if you've XenDesktop/XenApp licenses it was announced XenApp and XenDesktop customers are entitled to all of the features of XenServer Enterprise edition, regardless of their XenApp or XenDesktop license type. That's a pretty impressive step. You may still see the same license specification: 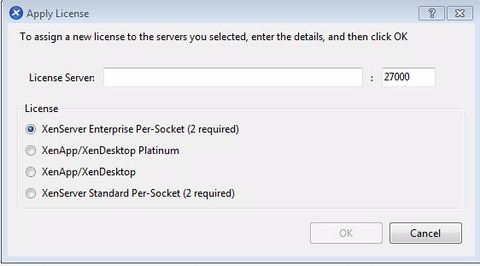 However, I am reliably informed, from an impeccable resource, that all of the top three options will result in the same set of features being enabled.. Note that you should upgrade their Citrix License Server to version 11.13.1.2 or higher in order to use the XenServer 7.1 licensed features and I'd anticipate a current license.

XenServer 7.1 allows you to run in an "unlicensed" state; however, you will not have access to all possible features, and you will not be eligible for direct Citrix Support. Also, note that mixed pools of licensed and unlicensed hosts will behave as if all hosts were unlicensed.

XenServer 7.1, as with 7.0, is available in two commercial editions: Standard and Enterprise. Licensing is determined on a cost-per-socket model.

The following table gives a comparison of features between  6.5 and 7.0 options - feel free to check the homework with the XenServer 7.1 Feature Matrix:

N/A  - not applicable; N/S Not Supported; @ - not available with XenApp/XenDesktop entitlements; $ - Not in Free/Standard Editions;

If you're running vSphere for XenDesktop or Xenapp workloads, unless you're getting the hypervisor for free, definitely worth considering saving some money and hosting those workloads on XenServer.

7.1 has new features, and tweaks for performance improvements, but I couldn't spot a key config limit change. How does this actually stack up as a difference between Citrix XenServer 7.0/7.1 and Citrix XenServer 6.5/6.2?

Minor point revision - so "none": unless you're the type of wag who would consider "XA/XD license restrictions" a "feature".

Citrix XenServer 7.1- Should I go there?

XenServer 7.0 demonstrated a radical change. There was improved performance increasing VM density, vGPU and storage performance, increased networking performance. But also, with the introduction of the Direct Inspect API, Citrix showed a renewed interest in the hypervisor by delivering a genuine never-seen-before-anywhere feature. While it is still early for this feature both in terms of full functionality and people having a chance to have a proper poke at it, with XenServer 7.0 ,Citrix showed a bold and committed direction.

At a feature level, 7.1 builds well on that new foundation.  With the LTSR of 7.1 you now have up to 10 years of support (5 years mainstream and 5 years of extended support) which makes it the only hypervisor to have product lifecycle dates fully aligned with Citrix XenApp and XenDesktop. This could simplify infrastructure maintenance for customers choosing to deploy a full Citrix solution where they are managing the stack. People are still getting their heads around the PVS Accelerator - but it joins Intellicache and MCS Caching to show enhanced integration and complimentary technologies that should sweeten the concept of using XenServer as the hypervisor to drive your XenDesktop/XenApp infrastructure. Even more so with the new XA/XD licensing options opening up all XS features.

However, performance and reliability are far more important that integration gimicks. The introduction of live patching will need to be proven for a lot of people, but the delivery would be a significant reliability improvement: especially when integrated with auto-updating and the Insight health check functionality that was introduced in XenServer 7.

At Summit in 2017, Citrix announced the HCI Workspace Appliance Initiative, with Hewlett Packard Enterprise (HPE) and Atlantis Computing stepping forward as the first partners to join the program. HCI solutions help to reduce complexity and cost at the hardware and storage layers, particularly for the mid-market - and having tools to ensure the hypervisor is current and stable greatly assist in the delivery of that "reduced complexity and cost".

Performance has improved in 7.1 for key areas of export/import and SMB - but there is room for improvement - especially in terms of networking for 10Gb services. That additional performance and reliability will be key to not only deliver on features that drive desktop and application delivery workloads, but to drive credentials to support server and application hosting workloads.

Given the LTSR status, given the new update functionality, given the new license options for XenDesktop/XenApp deployments - if you have XenServer there are great advantages in moving to 7.1. If you're on other hypervisors - by all means baseline your current environment and then consider an comparison - XenServer 7.1 is providing a feature rich platform that should be easier to manage from a patch maintenance point of view, understanding the density and performance comparisons should build a business case for migration.