Busy week again this week - but perhaps the most exciting was to finally get round to assisting the SAFC Foundation by signing up for corporate membership.

The SAFC Foundation uses the power of football to educate and motivate young people from Sunderland and its surrounding areas and last year, helped over 30,000 children through innovative projects, advancing literacy and numeracy and improving confidence and aspirations, as well as raising awareness of citizenship issues and improving employment skills. To find out more about the SAFC Foundation's work browse through what they do, and if you too are prompted to help, you can donate on-line.

And now for the science part. I did indeed get to take a look at MokaFive's BareMetal Player on a couple of devices, and my first impressions were very good. The architecture MokaFive have employed means that the solution is not a client-side hypervisor in the same sense that, say, Citrix's XenClient or Virtual Computer's NxTop are - but the BareMetal player does offer the opportunity to have manage and maintain a standardised platform on end-devices and provide a centralised desktop service that can be used off-line management. I'm working on kicking-the-tyres article for The Virtualization Practice and a comparative white-paper. In the meantime, have a read of Simon Bramfitt's informative article if you'd like to learn more and by all means try and get your hands on a demo.

I had interesting conversations with Virsto around disk performance in Hyper-V which led to an article and some useful feedback on optimising disk I/O. I got my hands on Desktone PoC instances to better evaluate Desktone's virtual desktop service.

I signed up to PaperShare getting access to a range of informative resources. Attended VMware's Forum at Wembley where I had good chat with Colt around IaaS, listened to Dell's new innovations around infrastructure orchestration and got a better understanding of VMware's cloud service offerings.

I got round to signing up to Citrix Synergy and was pleased to see some great presentation suggestions for the next UK Citrix User Group on 13th July.

Things I will be mostly doing this next week include: continuing reviewing MokaFive's BareMetal Player specifically on non-VT enabled devices; integrating Wanova's Mirage v2 with NxTop 3.1; firing up a XenApp 6.5 Tech preview and being part of a UK government workshop on Remote Working solutions.

This blog was brought to you by Greatest Hits by Bruce Springsteen.

As nights vs days becomes score draws and children are kicked off to university/school/nursery (delete as appropriate) it's time to admit its been a busy summer. Not had a chance to sit down and write here, I've a backlog of stuff to put on: no thanks in part to pressing F5 on the BBC's transfer page.

Still, I'll signal kick off by proudly standing under the steely eye of stewards and stating that Gilwood CS has put pen to paper to support the  SAFC Foundation of Light for the third year running. 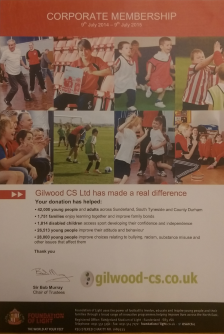 The SAFC Foundation of Light uses the power of football to educate and motivate young people from Sunderland and its surrounding areas and last year, helped over 42,000 children through innovative projects, advancing literacy and numeracy and improving confidence and aspirations, as well as raising awareness of citizenship issues and improving employment skills. To find out more about the SAFC Foundation's work browse through what they do.

If you too are prompted to help, you can help raise funds as an individual, or perhaps your company can help the Foundation in a business capacity.

Is excellent book, and an ethos, and a good practice. Its just "common sense"? noo. Getting Things Done is an organizational method created by productivity consultant David Allen. I've friends who take this method to an almost religious level: they do appear to have lots of free time. There is a lesson there.

The book is informative, entertaining and is in my bag right now. Always useful to dip into. Buy it.. 2nd hand if possible, lets protect the planet.

"But Andrew," you'll say, "your last update was in March, what have you been doing?" "Getting Things Done," will be my reply, "by doing other stuff". That's not helpful I know: I had a lot to write, I just never got round to it. Sorry.

So this is a concerted effort to Get More Things Done. In 400 words or less. Why 400? That's the number. The budget. I'm sure there are many people who will appreciate that there are a load of things they'd love to do if budgets were limitless (or simply larger) but 400 is what I have to deal with.

So in-between website launch and today.. I've presented at Pubforum and Brightalk, attended a splendid Quest partner day, checked out the BCS site, written a number of articles at the Virtualization Practice, I've worked with UK government, connected with a great set of people via LinkedIn, joined the Mussel Club. I've signed up to services from Desktone, Evernote, Oxygen, Podio and Rackspace: thanks to those who recommended them, they're great.

I've started design work for an NHS Trust. Set-to on new designs for UK government departments. I've had the chance to team up with CentrixSoftware, Desktone, and Virtual Computer on new projects. Reviewed an excellent white paper on VDI IOPS. Been introduced to the Kelway's excellent service offerings. Had a ton of briefings around new technologies and services which I've written and will be writing about at The Virtualization Practice and CitrixThings.com.

I'm often writing on a train. This requires music. This blog was brought to you by Anthology (Disc1) by B.B.King.

Just a short blog note this morning having finally moved the dev website to live.

Hopefully I'll be update this one more often via a new blog and some extra white papers.