To the bemusement of many Europeans, the British go to the polls in June to determine if we stay in the EU, or not. Personally I think the answer is a resounding yes and the whole exercise a complete waste of time. Yet, we are where we are.

The Citrix User Group Community is a far more accepting and inviting bunch. There has been an explosion of new groups in the past 6-8 months as the community gathers speed, yet some of those groups have existed for some time. This is the second time I've presented the Dutch Citrix User Group, you can read about the last time here. I was very pleased to be given the opportunity to speak again. This time there was 100% more content in Dutch than there was last time :)

My session was Citrix Lifecycle Management: The Toddler Years which talked through CLM, its place in Citrix Workspace Cloud, what you can do with it; how I'd put together the blueprint to automatically deploy an Atlantis USX instance of software defined storage (so used CLM to deploy Linux based services, not just Windows). I also talked about what I'd like to see improved... and how I thought it would benefit more in exciting new users from being free.

From feedback, it was useful, some of that "for free" sparked some debate - which is cool.

When you're presenting it's useful to listen and learn from the audience. I learned :

All in all, those last points were most interesting; there may be much marketing on "move to the cloud" and services available - but many remain (at least in the Netherlands) to be convinced. I think CLM has the capability to be one of those outrider applications/services that help make that move gain speed.

Many thanks to all who attended and contributed to make it the great set of sessions it was. Yet again, my compliments to the DuCUG steering group for a putting on such a professional event - splendid to see, fun to attend. I thank you for the pickup and arranging drop off service (which got *very exciting* at one point). As I've said before, I look forward to further collaboration in the future.  I do hope to get there again, and wouldn't hesitate in recommending you keep tabs on their future events, and attend (or present) if you can. 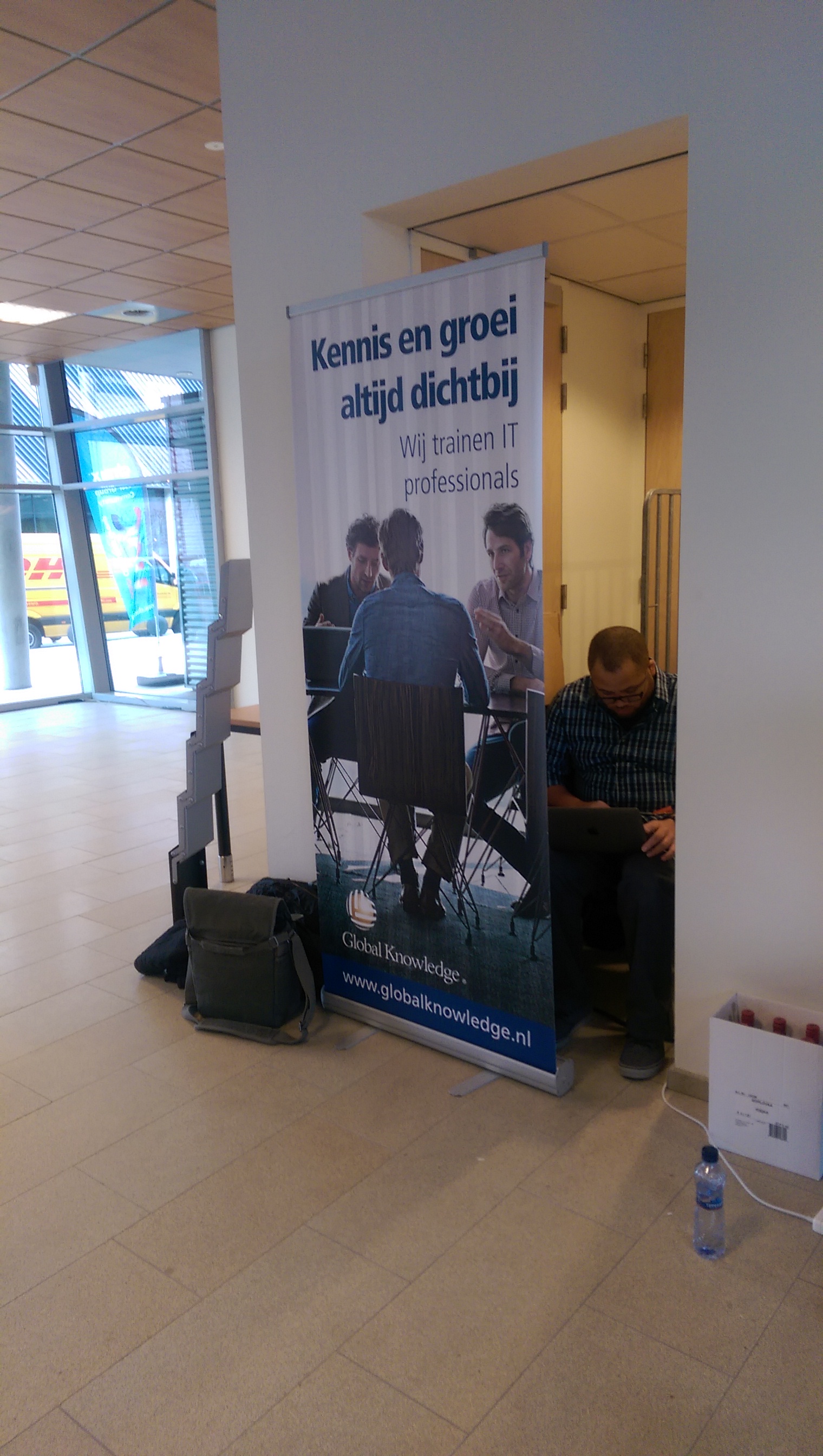 the green room; power, your own space

If, like me you're not a native Dutch, learn Dutch to get the most out of the majority of session. Perhaps that's a difficulty for European Synergy events: speaking in public is daunting, it is easier to articulate your point in your native language.  I could vaguely follow, there was intriguing content there on session monitoring, project delivery, IoT and new features Citrix are delivering. I look forward to reading about/seeing those in the future. That may put you off going, but the simplest way to get round that is to have a chat with people at the breaks and get their thoughts on the topics - everyone was very friendly and the conversations were excellent and helpfully for me, in English :)

With hospitality like this, why would you want a make a move for the brexit?

Hopefully see you at the Citrix UK User Group on 27th April in Edinburgh, where I may well be mostly hoping that all of the excellent presenters turn up, and nothing goes wrong.

Are you a Leicester City fan planning on celebrating going five points clear in the premiership in an unusual way? A Newcastle United fan hoping to celebrate moving out of the relegation zone but need to be sober in the morning? Are you interested in End User Compute technologist and wondering how you can justify sitting with a glass of wine listening to EUC people talk about EUC at about 9pm on a Monday?

Then join me and the rest of the team for the next EUC Podcast live stream and tweet chat. On this next instalment, we'll be discussing the evolution of Application, Desktop Session Virtualisation, and Containers. Our featured guests will be Kevin Goodman (FSLogix), Tim Mangan (Goldfather of Softricity), and Rory Monaghan (App-V expert, now at Turbo.net).

The EUC Podcast will be streamed live with a tweet chat on Monday March 14th at 21:00 GMT (2:00PM Pacific, 5:00PM Eastern). Add a reminder to your calendar to see it in your local timezone should your daylight savings time have kicked in and you're not sure when you are anymore.

To watch and participate in the podcast live, go to www.eucpodcast.com. It will be streamed and recorded live via Google Hangout with a tweet chat and delivered in audio Podcast format with EUC experts from around the world

The End User Computing Podcast (www.eucpodcast.com) is a community driven podcast for IT Professionals. The content covered on the EUC Podcast is primarily geared toward community support for application, desktop, and server virtualization technologies. Comments and community interactions are strongly encouraged to keep the authors honest and non-biased toward the vendors and technologies being covered.

For more information, a full list of the EUC team and many exclamation marks - visit the 14 March EUC Podcast Episode 9 - The One About App Layering

Its that time of year again, when the heady excitement that you had putting in Call for Paper requests reaches its natural conclusion. First up...

Citrix Synergy is a premier industry conference on digital business transformation. Synergy provides attendees with the tools and confidence they need to say yes to workforce mobility, security and compliance, BYO, workplace redesign, hybrid cloud infrastructure—and whatever comes next. Citrix customers, partners and industry influencers from around the world come together at Synergy  each year (and maybe one day, twice a year, with one in Europe) for strategic insights, business and technical training, and professional networking. Citrix Synergy, has host dozens of outside experts as guest speakers in some of our most popular breakout sessions.

Guest presenters are among the highlights of Synergy every year, representing a range of industries and some of the world’s largest IT companies. And one of those guest speakers is me :) Come to Vegas and hear me and my esteemed colleague Jim Moyle wax lyrical on how to Prevent Possible PVS Performance Pain Points, maybe come say hi at one of the many other great sessions from other excellent Citrix Synergy Guest Speakers as well as ruminate on the keynote, the Solutions Expo, the Learning Labs, the Meet the Geek Events or at the range of community events taking place. Or maybe even a small beer at a local bar.

While fellow Citrix User Group Community members are ever hopeful for a return of Synergy to Europe, I'd recommend making an effort to attend Synergy - it is great forum to connect and learn about Citrix technologies - or at least tune in the sessions that will be available on-line.

I'd suggest "can I go to Vegas for week" shouldn't be the sum total of your travel request form. Focus on the sessions, the free exams, the learning and knowledge sharing. To help minimise the expense, check out fellow CTP Neil Spellings' notes on Synergy Vegas on a Budget - an almost ironic wealth of information on keeping your valuable and effective trip cost efficient.

Look forward to seeing you there.